With both Mer and Octopus Energy focused on using renewable energy in their next generation charging units, it also means EV drivers have more green options than ever when it comes to powering-up.

It also simplifies payments for EV charging. EJN customers can easily charge up at Mer charging points using their EJN app or RFID card, without having to carry numerous charging cards for different providers. The cost of the charge then goes on their monthly home energy bill, keeping all charging costs in one place.

For Mer, the deal is another sign of its commitment to promoting roaming as part of the overall charging infrastructure in the UK. Roaming will become even more necessary in the run up to the 2030 ban on the sale of new petrol and diesel powered vans and cars.

Mer has been an active proponent of roaming since the company launched. Backed by Norwegian renewable energy giant Statkraft, the company believes that only through a network of open and accessible charging infrastructure can the UK install the quantity of charging points needed to meet growing demand.

In particular Mer is focused on installing EV charging points into high-usage, high-footfall locations like workplaces, public places, car parks and residential areas where people don’t have access to their own garages or driveways.

Mer, which has years of experience building out EV infrastructure in Norway, Sweden, Germany and the UK, is focused on working with businesses and local authorities to serve these high-footfall areas and help meet the estimated 400,000 additional public chargers needed by 2030.

Both Mer and Octopus are committed to only using 100% renewable energy sources with their electricity generated solely by wind, solar and hydro sources.

Commenting, Mer’s UK Managing Director, Anthony Hinde, said: “The easier and simpler we can make it for people to charge their EVs – and that involves both access to a wide variety of networks and having charging infrastructure in a wider variety of locations – the more confidence people will have in this technology. Mer is proud to have partnered with Octopus, such a successful innovator in the Renewable Energy world.”

“Roaming agreements like this are absolutely critical to supporting widespread adoption of electric vehicles across the UK.” – Anthony Hinde, Mer UK Managing Director

Zoisa North-Bond, CEO of Electric Juice, said: “Transport is the highest carbon emitting sector in the UK, so it’s incredibly important that we make charging more accessible and easy to use for customers if we are to help speed up the switch to electric vehicles.

“Mer joining the EJN is a great step in the right direction to offering our customers more flexibility and better coverage in high footfall areas so they’ll never be caught without charge.” – Zoisa North-Bond, CEO of Electric Juice

Mer is a European EV charging company, backed by Statkraft, Europe’s largest renewable energy generator. By bringing together its extensive expertise in renewable energy and electric mobility, Mer is on a mission to make EV charging simple, sustainable, and accessible to everyone. In the UK, Mer delivers complete EV charging solutions to businesses and local authorities, helping power the shift to purer transportation across Europe. 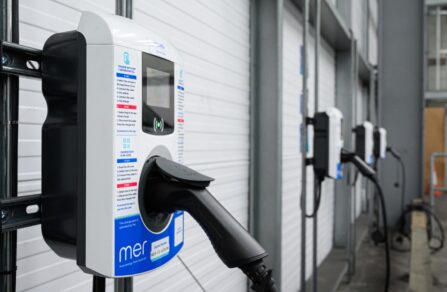